TORONTO, Jan. 6, 2022 /CNW/ - Toronto-based Hoame, North America's largest modern meditation studio, is giving consumers a taste of what self-care in the metaverse could be with an immersive virtual meditation studio for Meta Quest. The newly-launched subscription-based VR meditation app brings Hoame's unique in-studio experience to users around the world offering access to daily studio classes and on-demand meditations in beautiful virtual spaces guided by a diverse roster of expert instructors and 15+ class styles. 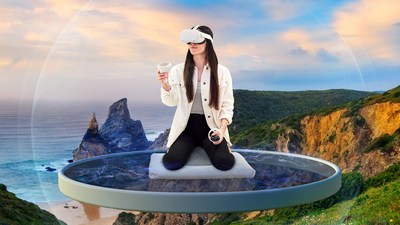 "A sense of place and immersion is central to the Hoame experience, it's what makes the studio an important part of our clients' mindfulness practices," says mental health clinician and Hoame co-founder, Carolyn Plater MSW, RSW who created the business alongside fellow mental health clinician Stephanie Kersta MSc, RP and Benjamin Plater. "Hoame for Meta Quest captures that essence but also expands on it, allowing users to meditate around the world in the most breathtaking environments with expertly curated music, while exploring various meditation modalities including breathwork, sleep, soundbaths, yoga nidra and more."

The app is launching at a time when extended lockdowns, closures, and fears around indoor classes, alongside increased isolation has many individuals feeling stressed and struggling with their mental health. Virtual reality allows Hoame to bring the elevated, impactful classes taught in the Toronto studio to subscribers around the world without the risk of lockdowns impacting their practice.

Similar to Hoame's Toronto-based studio, Hoame for Meta Quest makes community and connection an important part of its mission, allowing users to feel connected with others during the class. The virtual environment allows Hoame subscribers to access a suite of mental health tools.

"We've taken everything that we have learned from our physical studio, everything that our community loves and keeps them coming back: beautiful space, sense of community, tons of variety, and expert guidance, and incorporated proven mental health tools: mood survey, progress tracker, social co-presence with other users in-class, and combined it with the totally immersive platform that is VR," says Hoame co-founder and co-CEO, Benjamin Plater. "It's not only an escape, but one that will boost your mental and physical health."

Opened in 2018, Hoame, North America's largest modern meditation studio represents a shift away from the traditional reactionary approaches to health and wellness and a movement towards a modern and preventative approach to wellbeing. Hoame created a splash when it opened, garnering over 150 million media impressions and the attention of top Fortune 500 companies. Hoame regularly works with leading global and Toronto-based corporations to provide innovative wellness based solutions, disrupting the status quo of corporate mental health.

The Meta Quest team at Reality Labs lets people defy distance—connecting with each other and the world—through world-class VR hardware and software. The Meta Quest content team pursues the creation of best-in-class games, narrative experiences, and new VR use-cases like fitness, productivity, and travel. Meta Quest joins other teams at Reality Labs dedicated to cutting-edge research, computer vision, haptics, social interaction, and more. Reality Labs is committed to driving the state of the art forward through relentless innovation.

About Biotechgate
The Canadian Life Sciences Database is a product of Venture Valuation and part of the global Life Sciences lead generation and intelligence platform Biotechgate. Our mission is to provide up-to-date company and business information of the Biotech, Pharma and Medtech sectors to professionals everywhere, in order to support them in identifying the most appropriate business partners, customers and suppliers.